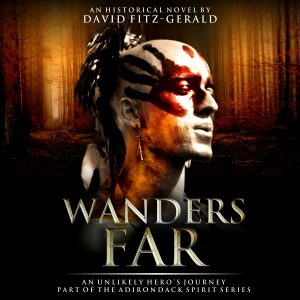 Wanders Far lived in dangerous times and was faced with one difficult challenge after another. He was a skinny, quiet boy who was raised on the banks of a tributary of New York State’s Mohawk River, hundreds of years before colonists arrived. One lifetime was not enough for Wanders Far’s old soul.

From a very young age, his wanderlust compelled him down one path after another. No village could contain him.

He was happy living a simple life in the physical world during challenging times. The spirit world had other plans.

A wise, enigmatic shaman mentored Wanders Far and helped him cultivate the supernatural visions that haunted him. His guide could only help him so far.

He set out to become a runner, carrying important messages across the lands of his people and their enemies. He ended up fulfilling a much greater destiny than he ever imagined.