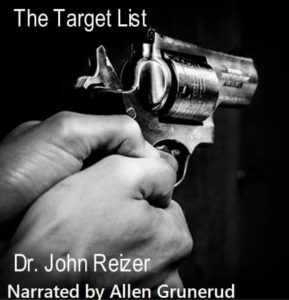 WAND is a revolutionary new medical tool that cures diseased tissues in human beings without the use of drugs or surgery. Ten years in design and production, the technology has a 95% success rate in curing most forms of cancer in animals and human beings.
The brainchild of 48-year-old Harvard Medical School graduate, Clyde Daniel, WAND (Wave-Altering-Nanoparticle-Disrupter) is going to move the profession of medicine out of the dark ages and into something that closely resembles science fiction. That is, unless the pharmaceutical industry, which stands to lose billions of dollars in lost drug revenues, can intervene with its hired assassins and destroy the technology and its team of creators before it ever has a chance to see the light of day.
The Target List is a medical science fiction thriller, a real pause-resister that will have listeners hooked from the first chapter through the very end of the book.