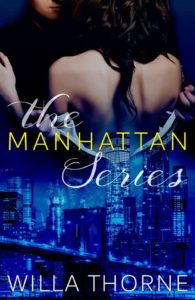 About The Manhattan Series (Books 1-3) by Willa Thorne

Once upon a time,
In a city not so far away,
There lived a girl who was in love with her brother's best friend.
Years later, their paths crossed again.
But he wasn't the same man she once knew.
Jaded by the world, he decided to use her as his pawn in a plan for revenge…

British businessman, Mason Woodward, seems to have everything going for him. He’s handsome, wealthy, and knows how to get what he wants. His best friend, Travis, was like a brother to him, until the day he found him in bed with his girlfriend. Now, Mason has a plan for payback that involves Travis’ younger sister, Jillian.

"The plan seemed simple. I'd use her every which way, and then send her back to her brother with a clear message: You had your fun, and I had mine."

Little did I know that I'd end up falling for her…

The Manhattan Series includes all three books in the set.
Book 1: His Pawn
Book 2: Queen In Play
Book 3: End Game