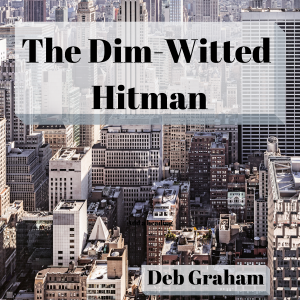 The Dim-Witted Hitman by Deb Graham

“Dimmie, my boy, it looks like you’re going on a luxury cruise.”
With those words, the hot-headed Irish mobster sends his best hitman to take out his old rival. He’ll never control the mob so long as Kerrick is alive.
Dimmie (short for Dim Wit) O’Malley, who has never been out of New York City, is trapped in a life he didn’t choose. With one misstep, he has a change of heart that puts his own life in danger.
A former mob boss, grieving the loss of his wife, refuses to stay in Witness Protection another day, and retires on a cruise ship. Having no idea he’s Dimmie’s next target, will his old skills save him in time?
Dimmie, trapped in a life he didn’t choose, has a change of heart that only serves to put him in Lucky’s crosshairs. When their paths collide on a luxurious New England cruise ship, only one of them can leave the ship alive.
You’ll love the warm characters, and how often do you find a humous, light-hearted, misunderstood assassin?

From the author of Murder on Deck, Peril in Paradise, and the best-selling Cruise Addict’s Wife series. FREE UK and US audiobook codes available.