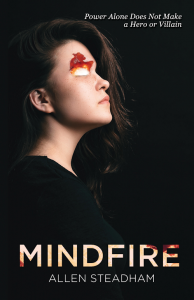 “For unto whomsoever much is given, of him shall be much required.”

Leia Hamilton can move things and set them on fire with her mind.

Leia’s father and step-mother tried to hide their past: a time when they were part of a team of superheroes. But despite being disbanded for over twenty years following a series of tragedies, their problems were passed to their children and Leia finds that her future collides with their past.

In the diverse world of human and superhuman, heroes and villains, friends and enemies, some of Leia’s choices have terrible consequences. For Leia, this leads to a personal crossroads and a search for redemption.

Not your normal superhero novel, Mindfire isn’t about secret identities, costumes, or evil plots endangering the world. Instead, self-discovery and adaptation is at the forefront as the reader follows the lives of the characters who are unafraid to show love and explore spirituality.

Can redemption and renewed grace weather the flames of absolute power and superhuman strength?