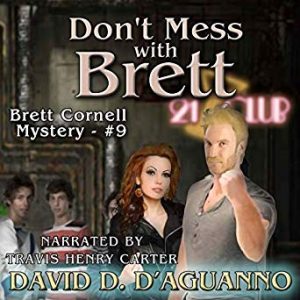 The life of an unscrupulous bastard can sometimes be fraught with difficulties.
First, there was the sweet young thing who claimed he’d impregnated her. (Know what a condom is, Brett?)
Then there was the desperate young man who wanted to take him to court. (One of the risks you run when you insist upon being so unscrupulous.)
How about the guy who showed up at his apartment and threatened him at gunpoint? (Punching him out at that party might not have been such a good idea.)
Or the ex-girlfriend who came back, just to call him STUPID? (‘Nuff said.)
But when someone left a dead body on top of his bedspread, the message that needed to be sent out was clear: “Don’t mess with Brett!”

Get Don’t Mess with Brett Here