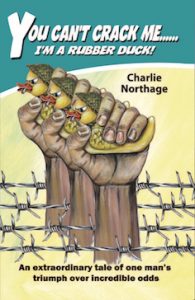 About You Can’t Crack Me…. I’m a Rubber Duck! by Charlie Northage

An extraordinary tale of one man’s triumph over incredible odds. From a thirteen-year-old runaway sleeping in a “cardboard box city” deep within London’s urban streets, Charlie somehow summoned the stamina and resilience to triumph over a relentless string of adversities, betrayals, rejections, and losses which persistently dogged his life, to pursue a successful twelve-year career in the British Army.

Leaving military service, and forced to accept any kind of low-wage labour, he struggled with an undiagnosed case of PTSD which eventually led to alcoholism and attempted suicide. Yet throughout his life he continued to meet each new challenge with a firm determination not to be beaten.

You Can’t Crack Me…I’m a Rubber Duck! is an account of frequent personal misjudgments, failures, and heartbreaking remorse. Without indulging in self-pity or self-justification, this is the story of an honest man, one who searches the very depths of his hidden pains and personal failings as well as his deepest joys and achievements. Without pulling any punches he reveals himself to us as he is.

Sprinkled with loving kindness, abiding affection, and heartwarming compassion and gratitude for those closest to him, it is, above all, an attempt by a father to divulge his life story in order to bequeath a legacy to the children he lost years ago. They never realised the deep love their father had for them, nor the anguish their absence caused him.

Ever hovering in the back of his conscience are the faces of his children and an underlying sense of loss. From their father who loves them deeply, this is their legacy.

Author Bio:
Having survived a turbulent early life Charlie Northage entered the British army and served for twelve successful years. Upon release from the military his attempts to find civilian employment proved fruitless and his life became a continual struggle against the devastating effects of an undiagnosed case of PTSD which eventually led to divorce, the loss of his beloved children, alcoholism, and attempted suicide.

It was only after years of wrestling with his solitary torments that a successful diagnosis gave him the regained confidence and strength to tackle the difficult journey toward a happier life. Without pulling any punches he reveals himself to us as he is, a human being whom we, if we are honest, can all recognise as akin to ourselves. His personal story is presented in his book, “You Can’t Crack Me, I’m a Rubber Duck!”

5 Stars!
This is a cool book – there is no other way to say it – brutal honesty and a thoroughly readable, down-to-earth telling of a complicated life. But he endures, and for that alone he is a man to be admired. So is this dark but marvelous book.
By Joel R. Dennstedt for Readers’ Favorite

5 Stars!
You Can’t Crack Me … I’m A Rubber Duck: is not your usual autobiography. This is a beautiful and powerful book; there is no denying it. And no matter what you say, you are going to see yourself in Charlie in one way or another. He is us, collectively.
By Rabia Tanveer for Readers’ Favorite

5 Stars!
The book is written in a very heartfelt manner and comes across as honest and genuine. Reading a book of this kind really brings home how much of our lives and experiences are outside our control and just “meant to be.” This is a great autobiographical read and I would recommend it.
By Gisela Dixon for Readers’ Favorite