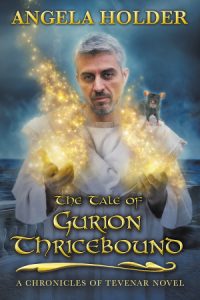 About The Tale of Gurion Thricebound by Angela Holder

Everything Gurion Elero has ever believed is a lie. Like all wizards, he has been granted magical powers by the Mother—powers that give his kind the right to rule over and exploit the Unchosen masses. But when the Oligarchs he serves order him to take part in the violent suppression of an Unchosen uprising, he is forced to confront the brutal truth of the wizards’ reign.

Appalled by their abuse of her gifts, the Mother withdraws her favor from the wizards, leaving them powerless—and helpless to intervene when a deadly plague spreads through Ravanet. Undeterred, Oligarch Darani tightens her vicious stranglehold. Gurion leaves behind his family and way of life to live among the Unchosen, turning spy for the very rebellion he once sought to stamp out.

Darkness is gathering, death is coming from all sides, and Darani will stop at nothing to destroy her enemies and secure her dominion over Ravanet. A reckless attempt to regain the Mother’s favor may be the only way to save wizard and Unchosen alike. As the specter of war looms, Gurion must marshal his courage, rally his people to battle, and face those who have betrayed him—and those he has betrayed.

For a limited time, The Tale of Gurion Thricebound is on sale for only 99 cents. Get it today!

“I love Holder’s writing. She tells a great story and makes magic seem real. I’m up for any tale she tells.” – Amazon reviewer

Author Bio:
Angela Holder lives in Houston, Texas, with her husband of twenty-four years. She has three children: one in high school, one in college, and one grown, married, and out on her own. She spends a lot of time in Starbucks, drinking vanilla lattes and flat whites and telling stories about her imaginary friends. She’s been a volunteer breastfeeding counselor for fifteen years. She enjoys dabbling in many hobbies, including spinning, knitting, weaving, costuming, hot air ballooning, singing in her church choir, and performing in amateur musicals.