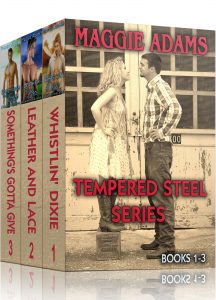 Meet the Coalson brothers in the first three books of the Tempered Steel Series –
A few years ago, the tiny village of Grafton, Illinois, nestled along the banks of the mighty Mississippi River, was completely destroyed by flood. Mac Coalson sets about the arduous task of saving what could be save using his construction company to help rebuild bigger and better homes for the community.
When vandals strike the new construction, it was up to Mac and his brothers to catch the culprit before anyone is hurt. While laying a trap, Mac thought he had captured the criminal, instead, he finds sassy spitfire, Dixie Harris, has stolen his heart.
Sam Coalson, ex-Navy SEAL, was run off fifteen years ago by the father of his high school sweetheart. He can’t forgive Angel Devereaux for her part in his humiliation, but he can and will find out who is behind the destruction of Mac’s construction business.
Charming Chance Coalson helps his brother run their construction business with a ready smile and a strong back. Considered the “Casanova of the County”, his love for women is legendary. Now this “bad boy” has become a one-woman man, and he must convince a shy firefighter he’s worthy of her love.

This Erotica book is available in these Formats: eBook