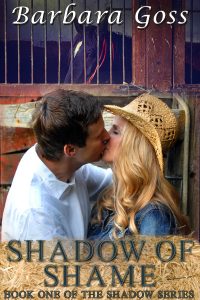 About Shadow of Shame by Barbara Goss

Ivy Jeffries falls hopelessly in love with Jonas Armstrong, a man who has forced himself into a somewhat reclusive lifestyle owing to his sordid past. Ivy is elated when he finally lets his guard down, and kisses her. She thinks they are now moving forward into a relationship, until he tells her it meant nothing to him. How could a kiss like they shared mean nothing to him, when it meant the world to her? Then she discovers he is pulling away for a reason, to protect her. Is the love they share enough to withstand his past and the child he is protecting?

Author Bio:
Barbara Masci Goss is now just Barbara Goss. Barbara Goss lives in Western New York State. Fleming Revel published Forbidden Legacy, Captured Heart, Dangerous Illusions, and Stolen Heritage in the 90’s. After obtaining the book rights she converted them into EBooks. They are ageless stories that are begging to be read again and again.

The books have plenty of Indians, kidnappings, danger, peril, mystery, and romance to keep you turning the pages. Recently, she has written more exciting westerns: Silent Love, The Romantic Ruse, Temptation by Moonlight, and the Hearts of Hays series: Dangerous Illusions, The Final Vow, The Kissing Bridge, and Drawn from Darkness. New: The Shadow Series: Shadow of Shame, Shadow of Deceit, Shadow of Regret, and coming in July 1016: Shadow of Hope, Shadow of Love and Shadow of Second Chances.

Barbara’s greatest influence in writing is the 100 books written by Grace Livingston Hill. As a Christian writer she weaves a bit of godliness into the romance and adventure and her books are always clean. Barbara is well on her way to catching up to Ms. Livingston.