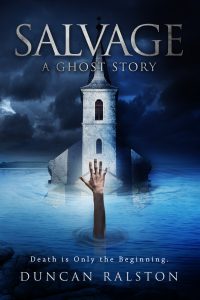 About Salvage by Duncan Ralston

Something is Lurking Under the Lake…

Struggling to come to terms with the sudden death of his sister, Owen Saddler becomes obsessed with the lake that claimed her life. The remains of a forgotten town rest at the bottom of that dark body of water — along with a host of buried secrets…

Thirty years earlier, the town of Peace Falls had been flooded to build a hydroelectric dam, and its ruins remain below the surface of Chapel Lake. The strange disappearance of the town Pastor, along with many of the parishioners, still haunts the citizens of Chapel Lake. But does the church haunt the lake itself? Is Owen really seeing ghosts… or has he descended into the depths of madness?

Author Bio:
Duncan Ralston was born in Toronto and spent his teens in small-town Ontario. As a “grownup,” Duncan lives with his girlfriend and their dog in Toronto, where he writes dark fiction about the things that frighten, sicken, and delight him. In addition to his twisted short stories found in GRISTLE & BONE, the anthologies EASTER EGGS & BUNNY BOILERS, WHAT GOES AROUND, DEATH BY CHOCOLATE, FLASH FEAR, and the charity anthologies BURGER VAN and THE BLACK ROOM MANUSCRIPTS Vol. 1, he is the author of the novel, SALVAGE, and the novellas EVERY PART OF THE ANIMAL and WOOM, an extreme horror Black Cover book from Matt Shaw Publications. He is one-third of the horror podcast Screen Kings, dedicated to dissecting Stephen King movies and miniseries.