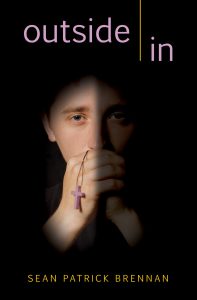 About Outside In by Sean Patrick Brennan

Inside the walls of a modern-day Roman Catholic monastery, 21-year-old Cody Johnson is trying to fit in, even though something within him is trying desperately to come out. Tackling a variety of issues from sexuality and depression to temptation and young love, Outside In is a nonstop adventure filled with twists and turns. Never before has the struggle between sacred vows and secret desires of the flesh been so personally felt or so viscerally explored. Cody is a young monk who hopes to avoid any trouble with his Novice Master, but while lying in bed one night, he hears a sound he never in a million years expected to hear inside a monastery. Two other monks have just come back from a walk, and the kiss young Cody overhears from the hallway awakens something deep inside him, a part of him he thought he had vowed away forever.

Author Bio:
Born and raised in Rockville Centre, New York, in the same home previously owned by Anne Meara’s family, Sean was an altar boy and later a bishop’s server in nearby Saint Agnes Cathedral. It was there in 1986 when he heard Mother Teresa speak about vocations. Whether it was this day or another that started it, Sean was sure of one thing: he wanted his life to be about something bigger than himself.

In 1993, just days after graduating high school, he joined the religious life, and lived in a monastery as Brother Sean for the next four years.

Sean’s own life has taken many twists and turns over the years. Besides being a Roman Catholic monk and an author, he’s also been a Publishers Clearing House Prize Patrol Deputy and a GLBT activist. Outside In is Sean’s fifth published book. He and his partner Andy live in Malverne, New York.