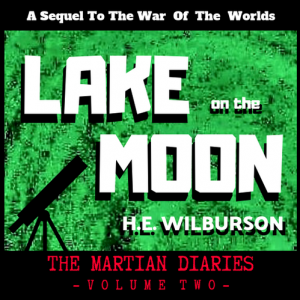 When a Martian cylinder lands on Horsell Common in 1906, Ogilvy the astronomer barely survives a deadly heat-ray attack and wakes up in a hospital inundated with casualties from this first alien invasion. He alone discovers the real significance of the Red Weed brought to Earth by the Martians and dispatches vital evidence on board HMS Thunder Child, but it is lost when the ship is attacked and sunk by Martian tripods. Years later in 1919, in the aftermath of the Great War and Spanish Influenza, an insidious new alien menace emerges on Earth from Red Weed left behind. A dangerous and daring plan is devised as Ogilvy, H.G Wells’ narrator and other original characters strive to combat the devastating Martian plague threatening to extinguish all life on our planet.

Lake On The Moon continues the iconic scifi classic The War Of The Worlds in this second volume of The Martian Diaries science fiction trilogy – a compelling, unmissable adventure complete with original music and sound affects.

5 star Goodreads reviews
“This is a clever and complex story that continues in the tradition of the original. Thank you, H.E. Wilburson, for bringing it back to life.”

“I really enjoyed the first volume of The Martian Diaries so I looked forward to hearing this, the sequel. I was not disappointed, if anything it is even better than the first volume! A must listen for any retro Science Fiction fans. Great fun and ideal for listening on road trips or on a vacation.”

“I have to say this…….is now a very serious contender for my “Book of the Year”. If you have ever liked Wells or Jeff Wayne’s musical version, you will love this. Thanks H.E., absolutely marvellous.”

Get Lake On The Moon Here