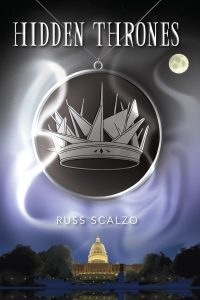 About Hidden Thrones by Russ Scalzo

A new award winning series from author Russ Scalzo. A supernatural thriller. A titanic clash between good and evil.

Jack Bennett has an unusual gift. His coveted ability means he is the FBI’s newest hire, serving as a consultant for their new Paranormal Division.
The government is convinced we are not alone in this world. With invisible forces all around, agencies are seeking how to harness that power for their own uses. The mystery swirling around the unseen and unknown has caused much speculation. Some suppose lost souls are wandering the earth, others believe deceased loved ones never truly moved on, and still there are those who are convinced that aliens have infiltrated our world.

Jack Bennett knows better. He knows who and what these powers are. The ancient scriptures talk about a great evil that was conceived in the depths of eternity. There, a great war occurred in a place called Heaven. Lucifer, the ancient serpent, the evil dragon of folklore, was cast out and bound to the earth and confined to its surrounding atmosphere.

Could it be that the evil we see is inspired by a dark kingdom, a demonic spiritual force at war with the human race? Could these princes and rulers of darkness be influencing our world today? Jack Bennett knows this is the truth. He knows because he encounters them every day.

Follow Jack Bennett in the first of a five part series as he battles the realm of Hidden Thrones.

Praise for Hidden Thrones:
“Spirit-filled fiction in a political thriller, what a treat!” David Bergsland of Reality Calling.
“This book was great! Action and intrigue right from the beginning and with a bit of romance thrown in.”
“I loved this book! It was exciting and thought-provoking.”
“What a suspenseful Christian novel this is. It is very much in the category of Frank Peretti’s “This Present Darkness” novel.”

Author Bio:
RUSS SCALZO: A full-time author and frequent lecturer in Biblical Prophecy, Russ brings a lifetime of technical expertise to a story he believes may very well be the substance of tomorrow’s headlines. “On the Edge of Time” began in 1994 as a 50-page short story named for the newspaper the protagonist writes for, “Chronicles of the End Times.” After a few years, Russ resumed writing with STEVE MAMCHAK and ultimately split the completed novel “On the Edge of Time” into two captivating parts that they feel is both Biblically accurate as well as dramatically powerful, hitting at the essence of our lives now, and during the time that may soon be upon us.

Russ’s new series HIDDEN THRONES features Jack Bennett a consultant for the FBI’s new paranormal division. Jack has an unusual gift that pits him against powerful dark forces that threaten to take over planet earth. In this series the author reveals the truth about paranormal activity.

In the 1960’s and 70’s, Russ Scalzo was the front man for The Hallmarks, a band popular along the Jersey Shore, and scored a record contract with Mercury Records. After a life changing decision, he went from performing in bars to ministering in churches and touring the country with his band, Saved By Grace. He has written too many songs to count, including music for several original musicals. He is the co-founder and president of a non-profit Christian theater company based in New Jersey, Lighthouse Stage Productions.

Russ currently resides on the Jersey Shore with his wife of 40+ years. He has three beautiful daughters and is a grandfather of three.

STEVE MAMCHAK: Long-time educator and author of a number of books on teaching methodology, Steve holds ministerial credentials and heads a drama ministry aimed at presenting Biblical truth in a timely and powerful manner.