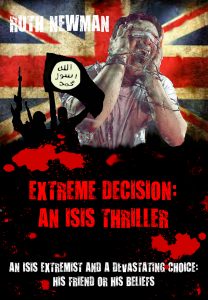 About Extreme Decision: An Isis Thriller by Ruth Newman

Two old school friends meet again in Syria. Alim, a British Muslim has joined ISIS; Nick, a charity volunteer, is delivering aid to the area. Nick is kidnapped by the terror group and now Alim is the only man who can save him; but will he risk everything for friendship?

‘The first time I became aware of the Muslim family moving into the same village was when my dad openly warned me that they weren’t the sort of people we mixed with.’

‘I thought we would be friends forever, but I suppose I just never knew what was really going on in his heart. It wasn’t friendship or love; it was hatred and resentment that kept his heart beating every second of every day. The community and country that had given him sanctuary and education were really his enemies; his nemesis; and he was simply living a lie until the day he could mete out his vengeful justice on a world that, from his perspective, had abandoned his sacred God and Prophet. What I thought of as the crazy years, were to Alim the years of final planning before launching his terrible retribution on Western values. The one thing he never accounted for was the fact that friendships can mean more than all of that.’

Nick Jackson signs up to drive a supply truck into Syria to help innocent civilians being terrorised by ISIS. Just beyond the Turkish border, Nick’s aid convoy is ambushed. Beaten, kidnapped and held hostage in barbaric conditions, the situation becomes increasingly dire. Nick’s life hangs in the balance, his fate decided by ISIS extremists who punish hostages with murderous brutality simply for having different beliefs.

In a bizarre twist of fate, Nick’s childhood friend Alim has been indoctrinated into the ISIS movement and is now fighting against the West. When the hostages are paraded through the desert streets in a cruel display of political power, Alim realises his old friend is among them. He must make the impossible decision: does he save his friend or stay true to his beliefs?

Embarking on a dangerous escape mission through the hostile terrain of the Aleppo plateau, Alim leads Nick towards the safety of Kurdish strongholds; but will they reach their sanctuary before being caught?