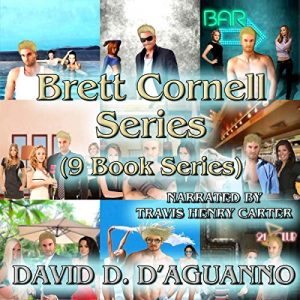 This is the nine-book series of comedy-mysteries featuring the tough and crass “unscrupulous bastard” himself – a rude, wise-cracking private detective who happens to be a hugely successful ladies’ man, thanks largely to what he immodestly refers to as his “Adonis-like features”.

In a series of tales involving murder, blackmail, and other assorted acts of violence and deceit, Brett learns the hard way that there’s a steep price to be paid for being such an unscrupulous bastard – and listeners may very well feel that he gets exactly what he deserves, and more!

Not recommended for the politically-correct crowd.