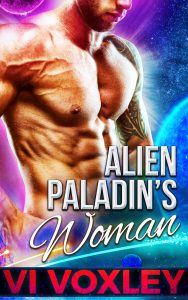 Tieran, the Commander of the Palian paladins, has never been allowed to have anything of his own, other than the blade in his hands and the honor he serves with. But a feisty, curvy, and utterly impossible human woman is about to change all that. He never thought that he'd desire something or someone as much as he needs her and nothing will take her from him. Even if he has to slay the most feared enemy ever known for her.

Audrey Price has seen a lot of hard work and cold times as a governor of ice planet mining colonies. She never expected to be in the middle of the greatest hunt in the galaxy, though. One moment, she was protecting her miners from an alien threat, and the next moment, she's tied to said threat, with only one man capable of keeping her and the rest of the universe in one piece. The sexy, infuriating paladin who makes her core pulse as hard as he makes her want to wring his neck.

Coming to grips with the fact that she's the key to tracking down one of the most mysterious and horrible races known is no easy feat, but that's nothing compared to dealing with the fact that she might be falling for the paladin. And when all eyes are on them, including a pair that can see through space and leave havoc in its path, Audrey and Tieran are in the fight of their life.

Not only for their own safety, but for that of the galaxy as a whole.

This book is available for only 99 cents until the end of September! Regularly $3.99