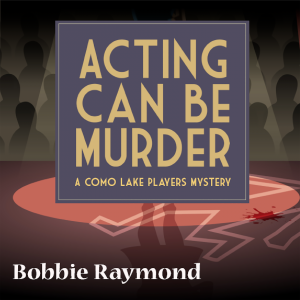 Acting Can Be Murder by Bobbie Raymond

The phrase “dying on stage” takes on a whole new meaning!

After fleeing a failed relationship in New York, actress Leah Sexton finds herself as the new executive director of the Como Lake Players – a small community theater nestled in a sleepy St. Paul neighborhood.

The initial calm of this new position is shattered immediately when a local critic – who had just panned the theater’s latest production – is found murdered on the show’s set. On the heels of this grisly discovery, the show’s lead actress tumbles down a flight of stairs…or was she pushed?

In order to keep the show running and the theater afloat, Leah offers to step into the leading role. The arrival of her ex-boyfriend amid anonymous threats against her and the show require Leah to act as if her life depends on it. Because, it does.

Buy Acting Can Be Murder